Theft, burglary and cybercrime are the most frequently reported crimes for small businesses.

Rather than being passive victims, many smaller firms recognise that they have agency. FSB research shows that the vast majority of smaller businesses have taken at least one ‘deterrent’ measure to protect themselves against traditional and/or cybercrime. But they cannot achieve success on their own.

They urgently need the Government to ensure sufficient funding and resources to improve police capability and capacity. The recent Government announcement of an extra 20,000 police officers is a welcome step in the right direction. However, this does not bring England and Wales up to the European average number of police per 100,000 people. Significant extra funding would be needed to achieve that. 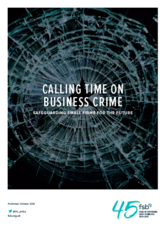 The report can be downloaded from the FSB website at https://www.fsb.org.uk/docs/default-source/fsb-org-uk/fsb-businesscrime-report-v03.pdf?sfvrsn=2135f721_0

Other FSB publications are available at https://www.fsb.org.uk/media-centre/publications