Staffordshire is home to the oldest Business Crime Reduction Partnership in the UK, accoring to Julie Davis who has been in charge since its inception in 1988. It has built a network of 26 retail and pub groups incorporating 900 member businesses to reduce crime in town and city centres around the county.

These groups have been brought together under the banner of Partnerships Against Business Crime in Staffordshire (PABCIS), a not-for-profit organisation, which has won the support of police for its work in identifying offenders and creating a business model which is being copied by other police forces.

PABCIS’ achievements were recognised on Tuesday, 6 August when it received a Business Crime Reduction Partnership (BCRP) award from Police Crime Prevention Initiatives (PCPI), a national police organisation, which works alongside the police service to encourage and deliver safer communities.

The BCRP accreditation process is based on a set of standards which include good management practices and procedures such as membership agreements, data security and compliance with current legislation. It includes having robust information for members and partner organisations that is up to date as well as making it easily accessible 24/7. For some BCRPs, the standards will include the use of CCTV and radio links with members.

PABCIS’ successes are considerable. For example, it helps police check CCTV footage especially when police resources need support or when officers are unable to identify suspects.

In the six months prior to March 2018 when PABCIS moved into the resolution centre at Hanley Police Station in Stoke-on-Trent city centre, it identified 22 suspects responsible for multiple offences from CCTV footage and local knowledge. In the following six months, a total of 64 offenders were identified – a success rate that is maintained today.

Julie Davies, who has overall responsibility for PABCIS, said: “Nine times out of ten we will know who they are.”

Other ways PABCIS help police include:

- searching systems for member businesses which have reported incidents to police and lower level incidents that members wouldn’t necessarily report. “We’re actually creating a truer picture of what’s really happening within the business community than police may be aware of,” said Julie.

- spotting trends of offending, such as using fake IDs or stealing particular products. “We would run campaigns to combat these or support crime prevention at certain hotspot locations.”

- identifying offender crime patterns, such as when they operate in different locations or repeatedly breach their exclusion orders. “So it’s raising the profile of offenders for further action.”

So it’s no wonder that PABCIS has caught the attention of other nearby police forces, such as West Midlands, West Mercia and Derbyshire that want to follow its model of working and set up their own county partnership schemes.

PABCIS’ roots date back to Stoke in 1988 when the city launched the first business crime prevention initiative in the UK and with the UK’s first retail radio link. Julie was in charge from its inception.

Over the years, more business groups set up elsewhere in the county to safeguard their local daytime and night-time economies. Each was managed separately and had their own identity, funding, governance, processes, policies and strategies.

However, by 2012 police were looking for a more strategic and consistent way of working within a single organisation with one over-arching manager that could oversee all 26 retail and pubwatch schemes in the county. Julie was tasked to deliver this.

With many individuals embedded in their roles over many years, Julie recalled it was ‘trying to turn the Titanic’. It was managed in three phases:

Phase 1: focused on persuading the management of local groups about the need to change and adapt to different business and policing circumstances. It also involved creating consistent policies, which varied widely. For example, the same town centre had a two-year exclusion from all shops for someone stealing chewing gum whilst an incident causing a serious injury in a pub may have only resulted in a 12-month ban. “It took two years to implement the policies so they were consistent and balanced across the county,” said Julie.

Phase 2: led to the appointment of three regional managers in Mid Staffordshire (Stafford and Cannock), North Staffordshire (Stoke-on-Trent, Newcastle, Leek and Cheadle) and Trent Valley (Burton-on-Trent, Uttoxeter and Tamworth) to manage their own retail and pubwatch groups and deliver intelligence and information briefings every month – and weekly in city centres. This is so members learn about active offenders and share local concerns. These briefings are attended by members of the Neighbourhood Policing Teams.

Phase 3: set about creating one organisation – PABCIS – with its consistent practices and policies. Formed in 2012, business members joined PABCIS, not their local group, but continued to share the intelligence and information available to that local group. Also, income was centralised and shared across all groups to ensure consistent levels of service county-wide.

Businesses from each of the groups are invited to have a representative on the PABCIS Board of Management, which manages day-to-day operations. PABCIS also has three Directors from member companies to manage the company and employment responsibilities.

Board members are very often high-level managers and decision-makers from within their own companies – providing PABCIS with a breadth and depth of business expertise.

Julie’s role has been part funded by a four-year grant from the Staffordshire Police, Fire and Rescue and Crime Commissioner’s Business and Crime Strategy and is on track to be self-financing.

PABCIS works closely with the Business Improvement Districts (BIDs) in Hanley city centre, Lichfield and Newcastle-under-Lyme. In the last few months, PABCIS has set up a Business Crime Support Group, which meets twice a year. It is chaired jointly by Julie and Chief Inspector Gemma Ward to inform Neighbourhood Policing Team officers about best practice learning and how joint working can reduce crime in local communities.

Speaking at Hanley’s resolution centre, a desktop investigation unit where officers investigate crimes that don’t require an immediate response, Julie said: “Staffordshire Police has placed a massive trust in us by letting us work alongside police officers. We have become an integral part of the county’s business crime strategies.

“It’s been a battle but I think we have got there and it’s working because we have been prepared to change, and not assume that we’re always right. If things need to be adapted or different processes adopted, then we’re willing to do that so long as it’s for the right reasons and it’s going to be effective. We have also had considerable engagement and support from the representatives on the Management Board and BIDs across Staffordshire,” she said.

Julie is continuing to support partnership working outside Staffordshire to develop a process for sharing regional and national intelligence to help tackle country-wide issues, such as offenders moving to different areas to commit crime, rising levels of retail violence and the need to promote greater crime prevention. 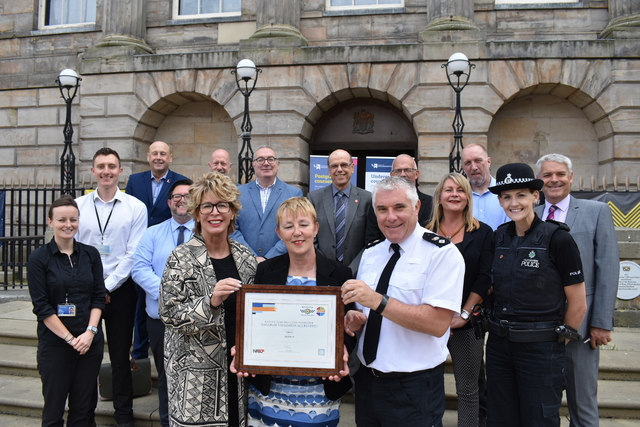 One of Julie’s team, Paul Greenhough, who manages the North Staffordshire area, has received a police commendation for his work identifying offenders and Julie has been awarded an OBE for her partnership services to the community.

Chief Superintendent Jeff Moore, of Staffordshire Police, said: “PABCIS is an excellent example of organisations working together to reduce crime. PABCIS brings businesses together to share information, understand crime trends and respond to them. This is not only good for businesses but also makes our towns safer for those who visit, live and work. The award is well deserved and I am delighted that the partnership has been recognised for the great work it does.”

Sue Arnold, Deputy Police, Fire and Rescue and Crime Commissioner, who manages the business crime portfolio on behalf of the Commissioner, said: “Business crime is a very real threat – these are far from victimless crimes and can devastate companies of any size, in any industry. I am delighted that PABCIS has achieved this accreditation, which is testament to the partnership’s consistent approach to tackling business crime in Staffordshire.” 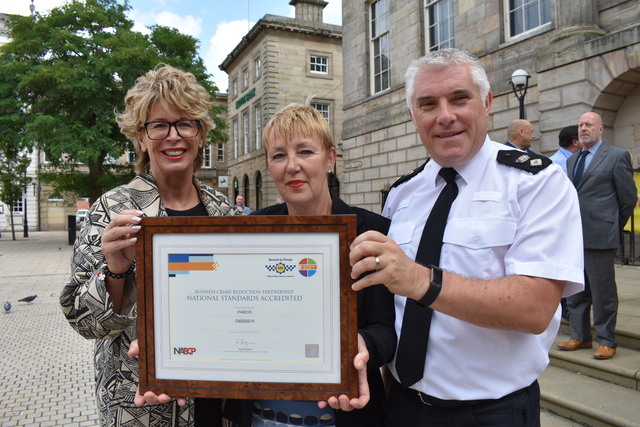 Guy Collyer, of PCPI, said: “Achieving this accreditation is another major step forward for PABCIS. They are leading the way in this area and should be truly proud of what they have achieved.”

David Wilson, Executive Board Member, of the National Association of Business Crime Partnerships (NABCP), which was the assessing organisation for Staffordshire’s accreditation, commented: "PABCIS is an outstanding partnership leading the way on innovation and best practice nationally. The working relationship they have developed with the police and the confidence they have in PABCIS is exemplary."